Mr Mustard has been working very hard for 6 months on site but now he is back and has the time to do things like have an idle look through the previous freedom of information responses of Barnet Council. He came across this response: 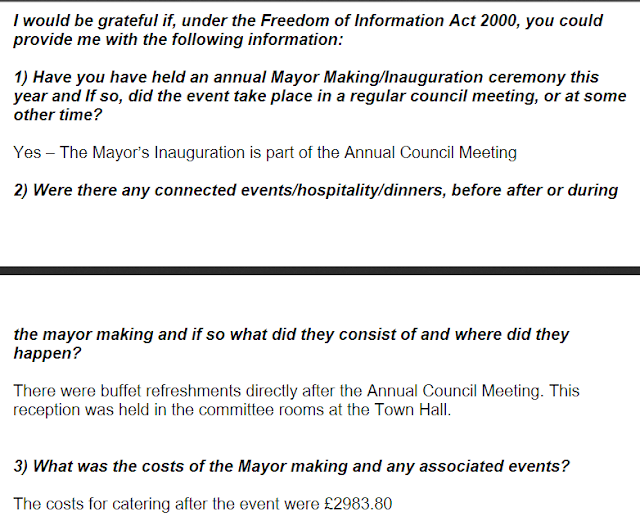 Mr Mustard likes a good feed much like many people. The difference is that he does it at his own expense. He has spent 6 months on site so at the end he took the whole team out for a restaurant meal and paid the bill, he did not charge his client.

The Greyhound in Greyhound Hill could probably provide a lovely buffet for £1,000 if a council officer were to ask them. Just think about it, £1,000 buys an awful lot of vol-au-vents, quiche, chicken drumsticks, sausage rolls, pizza slices etc. A thousand pounds at a time when the minimum wage is £7.83 an hour and catering workers are generally lowly paid and food in supermarkets is cheap.

Anyway, Mr Mustard tweeted that this was a saving worth having

At the least someone should look at what is being ordered and who provides it and see if there is scope for a saving. These are meant to be the days of austerity.

Slightly to Mr Mustard's surprise the local branch of the Conservative party defended the ridiculous spend:

When you are spending someone else's money it is easy to lose touch with reality. Mr Mustard though he would fact check this. Now the bloggers always used to pop around to The Greyhound for their refreshment after committee meetings and would find opposition councillors in there. No-one was on an expense account but were generous with buying each other drinks if their pocket so allowed. If meetings ran on until 10pm at night Mr Mustard was truly in need of a pint of Youngs after listening to dry council business for 3 hours. Mr Mustard thought that the meeting in question must have been extended beyond 10pm or even gone right up to 10.30pm

So Mr Mustard checked the time at which the May 18 meeting of full council ended. The answer, dear reader, was 8.27pm with the meeting having started at 7pm

So a meeting which lasted 87 minutes is, in the eyes of the unknown tweeter of the BarnetTories twitter account, an account which he/she shouldn't be allowed to have any unsupervised input to, a 'particularly long meeting'

Now what does 'particularly' mean? This

Oh dearie dearie me, Mr Mustard finds that both definitions leave the tweet of the BarnetTories looking like a scrap of self serving nonsense, a smokescreen, an attempt to polish a turd (sorry about the phrase when eating is being considered).

So Mr Mustard thought he would go back to see if this 2018 investiture of the bling of mayoral office, as worn & tainted by a former mayor being found guilty of assault by beating (you would surely want a brand new chain of office after that?) took longer than in previous years? Here is the answer: 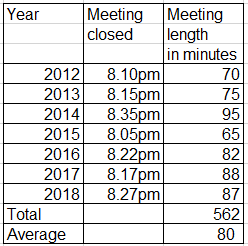 So whilst this meeting did take 7 minutes longer than the average for the last 7 years, it really in all honesty cannot be called a long meeting, as they take 3 or 3.5 hours, and it definitely can't be called particularly long as 2 meetings in the last 7 years took longer.

What really begs the question is why catering is even called for at all, for meetings that take an average of 1 hour and 20 minutes, when historic meeting lengths are recorded & available. Any self respecting Mayor would invite everyone round the pub and put some money behind the bar, or invite them round to his place, or the mayoral parlour, and get a couple of barrels and some wine in and crisps & peanuts and have a jolly old time without soaking the public purse for almost £3,000.

The mayoral knees up should be scrapped. He has a year of municipal functions ahead of him and his waistband will thank Mr Mustard for it at the end of the year.

In a time of austerity the Mayor also needs to tighten his belt.

p.s. the identity of the writer of the tweet by @BarnetTories is unknown, Mr Mustard checked that it wasn't one of his own High Barnet councillors, David Longstaff, & it wasn't. Probably best that the writer remains anonymous to spare their blushes. The identity of Mr Mustard is public knowledge given his past appearances in the media.
Posted by Mr Mustard at 6:30 am