Time to stop this sort of PCN 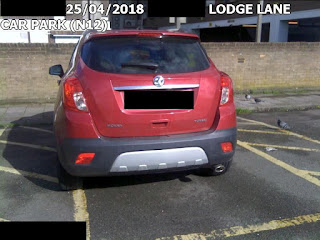 This is the type of situation which Mr Mustard hopes will arise less often if the residents decide to vote Labour councillors into power as Mr Mustard thinks that they will be more inclined to listen to his advice and be more reasonable towards the public.

The above car was given a ticket for not being 'parked correctly within the markings of a bay or space'. The driver is a blue badge holder and that is a disabled space that his car is within. Given the large distance to the next bay, which is now an electric vehicle charging bay, no difficulty would arise for any car in the adjoining bay as there is plenty of space within which to open car doors.

One question is therefore why this sort of borderline but miserable PCN gets issued? (and this one to a client of a money advice centre which Mr Mustard assists) and the answer that Mr Mustard comes to is that ruling councillors take very little interest in day to day ticketing activities carried out by NSL, their outsourced supplier of traffic wardens, unless a resident complains and residents tend not to.

The second question is to whether the car is outside the markings of the bay at all, as the hatched area can be seen to be part of the bay, at least up until the mid-point between two bays. Mr Mustard can't see an adjudicator upholding such a PCN given the complete lack of a traffic management purpose, the only obvious purpose being the raising of revenue.