Hundreds and thousands of Fixed Penalty Notices are being issued in the name of Barnet Council for littering, fly-tipping, dog fouling and fly posting. A 6 month trial started in July 2016 and has continued each month without a proper tendering of the contract in accordance with EU procurement law (imho).

The sums involved are large.

The percentage paid column for April 18 will doubtless be up at the 50%+ level given more time for payments to be made.

The Environment Committee is meeting on Tuesday 5 June & Mr Reasonable has asked the council to tell him what income the council themselves have derived from the non-contract. Mr Mustard thinks the answer is nothing at all, as during the initial 6 month trial period NSL Ltd were allowed to keep all of the income & no-one at the council thought to renegotiate as time passed . That was a council employee playing a game of contract negotiation during which NSL had all aces and the employee had nothing as NSL have the data from other boroughs and so know how many FPNs they can issue per shift & what they cost, so naturally they wouldn't have agreed to the deal if they were going to lose money on it.

Since then the non-contract has been allowed to run on and eventually we might have a proper procurement exercised concluded.

In the meantime, did Barnet Council obtain best value? It doesn't look like it.

The EU procurement threshold, at which a contract should be tendered, is £181,302 p.a. Let's call it £15k a month. The first month in which £15k was paid was September 16 and it hasn't dropped below that since. The director in charge of street scene should have noticed this a year ago and acted. However, if all the money was going into NSL's pocket then it might not have been flagged up, although there are meant to have been monthly meetings about the progress of enforcement (Mr Mustard will do an FOI for the records).

Here are the monthly figures for the 22 months that the trial has been followed by out of contract enforcement action. 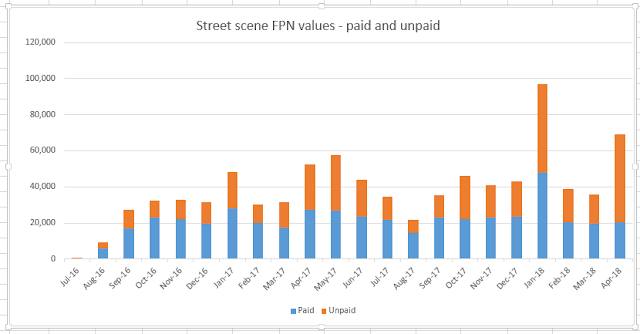 Mr Mustard thinks that the blunt instrument of a Fixed Penalty Notice does not deter, except the person who wouldn't dream of littering in the first place. This is because he thinks that over the last 2 years the amount of littering and fly-tipping in Barnet has increased and this may well be a consequence of reduced street cleaning and bin-emptying activity by the council. If the public realm looks less tidy, thanks to the council's reduced activity in that area, the public conclude that the council don't care and so why should they and down goes the litter and the dumped mattresses onto the pavement.

Amazingly the council only issued 4 FPNs for dog fouling (as in fouling by dogs that wasn't removed) and 8 for fly-posting. It looks like the target has been soft enforcement.

Mr Mustard has been contacted by two businesses who have proper arrangements with licensed waste carriers (one of them the council & the other Veolia) with one paying out £8,000 a year to ensure the proper disposal of their rubbish, who have been given FPNs for fly-tipping. The trouble with the FPNs is that unlike parking PCNs, which have a strict timetable and no additional costs for Appealing, if you want to dispute a FPN there is no formal mechanism or rules to do so (the system rather assumes guilt) and you have to wait until a summons to the Magistrates' Court arrives and then you need your solicitor together with the attendant time & expense and then somewhat summary justice is dispensed.

The committee meeting is on Tuesday, so if you want to ask any questions you need to email them in by 10am tomorrow. Mr Mustard is off to do that now.

Before he goes he will caution you against dropping a sweet wrapper or a cigarette butt or in fact anything at all and if you are a business don't let anyone you know re-use anything of yours without you first of all having removed anything which identifies the business as it will be assumed that a dumped box bearing your business name will have been dumped by you.

Mr Mustard suspects that this example is just the tip of the iceberg which was put into reasonable order after the MetPro scandal and is now back in turmoil.