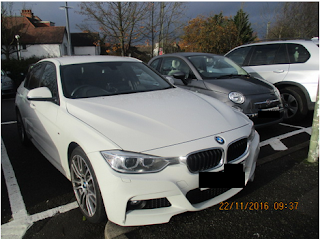 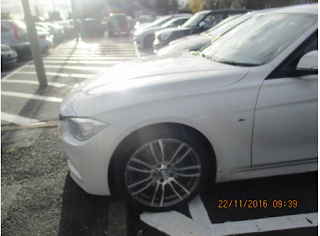 Regular readers will recall this location appearing in the Standard a year ago and after that PCN for being outside of the box simply stopped. In addition, greenspaces trimmed the hedges back and Mr Mustard did see some resurfacing equipment there a few months back so some tarmac upkeep may have occurred.

Thinking perhaps that everyone will have forgotten about the events of November 15, a modern day highway robber, kitted out in his/her NSL uniform and possible astride a white charger (scooter) and waving their paper bullet issuing HHC pistol (hand held computer) decided on 22 November 16 to give the above car a parking ticket. Now it could have been parked a little more tightly within the space but it isn't doing any harm as nothing or no-one parks or walks across the front of it.

This is a trivial contravention and one which a traffic warden should either walk past or helpfully leave a note asking the motorist to park more neatly in future. All that has happened is that the council have annoyed the motorist, the council have suffered more reputational damage, Mr Mustard has more work on his plate and the council will have to pay out £30 for the inevitable tribunal visit which 90%+ of the time goes Mr Mustard's way. The guidance from London Councils is that an entire wheel must be outside of the bay; it isn't.

The traffic warden has a high badge number, approaching 500 so is a newby (there is quite a bit of staff turnover) and has not appeared on Mr Mustard's radar before (he logs every PCN he tackles). The question arises as to how new traffic wardens are informed of all the particular contraventions and locations at which they should not issue PCN - they probably aren't.

Mr Mustard will ask parking management to kill this off. They must be sick of the trouble that NSL cause them. Outsourcing can mean out of control.