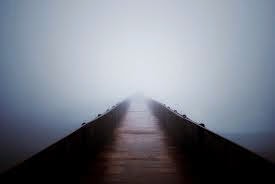 For at least a couple of years, the email address of Barnet Council's parking permits section has been parking.permits@barnet.gov.uk and it is, in fact, still being put on letters which have your new permit attached, viz:


Now, a reasonable resident might just conclude they could therefore contact the parking permit section by email and many of you have done just that. You have been whistling in the wind as those emails do not get a response because the address is configured for outgoing email only. Mr Mustard has been told that an undeliverable message will automatically be generated.


Now you know Mr Mustard, he likes to test things himself, so he sent an email. He also put delivery and read receipt requests on it. It was delivered, doh!

No-one is looking at them though, delivered or not.


The permit system has been the subject of more than one change since Capita took over. No positive communications explaining this have been pro-actively sent out with residents left to find out the hard way when they don't get a permit nor a response and extra PCN are being issued some of which will end up being paid (not if you go via Mr Mustard they won't) as some people with busy lives just want quiet lives. Coupling a defective email address with a lack of permit renewal reminders is a double whammy and extra income for the council. 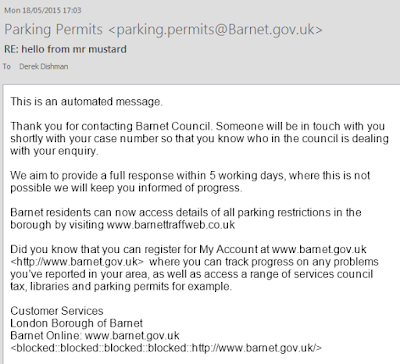 which does seem perfectly reasonable except for all those words at the bottom "blocked:" which makes him think he won't get a cheery little hello back from Crapita in Coventry.

What you do need to do if you have sent documents to that email address is to phone 020 8359 7446 or go to this link and upload your documents rather than email them. You will need your PIN number which you might have to phone up for as no previously allocated reference number for you seems to last 12 months.

If you haven't got your permit also ask for a dispensation and then put a reminder in your phone as you need a new one every 14 days.

It would be much better if the council opened contact points in libraries where this sort of thing could be applied for in person, your documents could be checked and loaded by a council employee and your permit could be printed out on the spot. But that would be to put the needs of residents first which is only an empty mantra, not actuality.