Something really should be done about NSL (and in theory someone in the council parking client side who has to decide upon formal representations) rejecting perfectly valid challenges. Every one they get wrong costs the motorist £60 or £110 if they pay up (probably at the 50% rate though) or costs the council £40 when an appeal is then made to PATAS. Here is a recent PATAS adjudication decision with the odd typo corrected:


The Appellant holds a business permit. As he was changing vehicles, he was given a dispensation number which he displayed while he was parked in a pay and display space in Fitzjohn Avenue car park.

I do not think that the issue was about the use of the dispensation number, or whether it was displayed. If that was the issue, I would have no hesitation in finding in the Appellant's favour. That said, the Authority's case was not clear at all.

At the formal representations stage, the Appellant then pointed out that there was a notice in Moxon Street car park which advises permit holders to use the Fitzjohn Avenue car park instead. This notice stated that the change was effective from 25 February. It did not say that the change was temporary. The Appellant also pointed out that the sign at the Moxon Street car park states that business permits are not permitted and this is not stated in the Fitzjohn Avenue car park.

The Authority then issued a Notice of Rejection which suggested that business permits are not valid in any car park. However, a PCN issued in the same circumstances was cancelled at the formal representations stage. The letter of acceptance indicated that the Appellant's representations were accepted.

In summary, the Authority had by this stage contradicted itself on whether business permits can be used in the Fitzjohn Avenue car parks. It had in fact contradicted itself as to whether business permits can be used in a car park at all. One would have thought that the Notice of Appeal should have caused the Authority to consider the position more carefully. It did not.

The Authority went on at length about pay by phone or pay and display, which are not issues in this case. It said that business permit holder/those with dispensation cannot park in the Fitzjohn Avenue car park. It said that each case must be treated on is own merit.

Each case should be treated in its own merit but if the Appellant makes an identical submission and supplies identical evidence, any differences in outcome needs to be justified. Furthermore, the letter of acceptance and the evidence of the notice at Moxon Street car park clearly implied that business permits can be used in some car parks. The Authority has not explained how these sit with its claim that permits are no valid in all car parks.

I am not satisfied that the contravention occurred. I am allowing the appeal.

The above explanation explains why you need to go to PATAS armed with background evidence of what the parking regime is, perhaps by taking printouts of the council's website or like this person with a photo of a council sign that might become relevant to your argument.

In case you are not yet confused enough, here is an extract of a letter about the changes to parking arrangements in Chipping Barnet from February of this year. 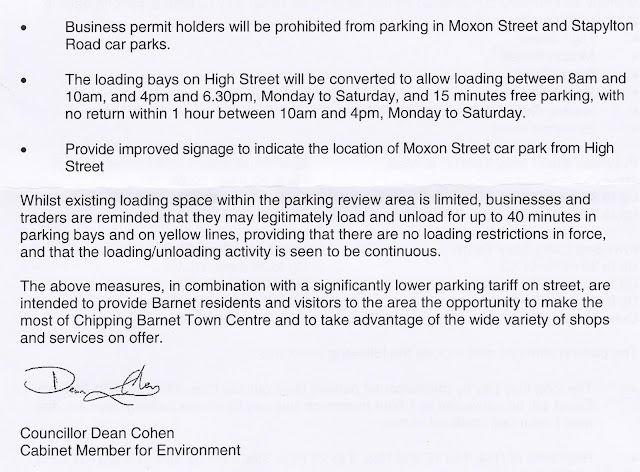 and then this is what a local trader says:

It is indeed a mess.

Before 25th Feb this year when we were kicked out of Moxon St car park I was emphatically told that businesses could only use the car parks! The CB code was assumed to stand for Chipping Barnet. I was told that there were no business bays in High Barnet.

After Feb we were told that CB stood for area C and Businesses. We were in fact NEVER permitted to use any of the car parks!

We were also told that we were forbidden from parking in Moxon St and Stapylton car parks only. That would leave the long stay Fitzjohn as suitable. We have, on desperate occasions, used it. If you have a vehicle larger than a Mini you have to climb out of the windows because the bays are so narrow.

Mr Mustard is pleased he has been able to clear that confusion up for you! The council are there to serve us. They do. Badly.

If the council are going to take £525 from traders for a permit for a year the least they could do is to provide some appropriately sized spaces as traders are more likely to have larger vehicles in order to move stock. A charge that is 13 times what a resident would pay for a car is unsustainable and possibly revenue raising. Mr Mustard knows what we need, a judicial review of the charge and some other councillors in charge. Look at the top left and you'll see how many days it is until you can kick the current incumbents out. Traders are likely also to be local residents. Make your voice heard.