Who was better informed after the meeting? 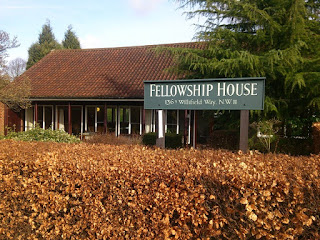 The report that follows is by a clear thinking, intelligent and dynamic resident of Totteridge ward. Barbara Horn Jacobson, who is a member of the Barnet Alliance for Public Services. Thank you for giving up your time Barbara.

The advertisement for Hampstead Garden Suburb Residents’ Association open meeting on 5 February reads  ‘OneBarnet’,  ‘Deputy Leader to speak: outsourcing explained’ , ‘An opportunity to learn what is being outsourced and why recycling is being brought in-house’,  ‘Cllr Daniel Thomas, a Suburb resident and Barnet deputy leader, will speak’ ; we might have added ‘at long last’.  For more than two years Cllr Thomas has been one of the two Cabinet members leading the One Barnet Programme ("OBP"), pushing it ahead without consulting or informing the residents, and refusing to listen to the more than 8,000 who have been informed by BAPS and have signed the petition for a referendum.

Elsewhere it was said that the meeting would be ‘factual, not political’. Another aspiration not achieved. At the meeting Cllr Thomas declared that he is a politician and wants to be re-elected, so perhaps it was with the election of 2014 in mind that he accepted the invitation to appear before this small gathering of his neighbours (about 40 residents of the Suburb and 10 residents from other parts of the borough) in the hope and expectation that they would approve of his version of the OBP. It was not to be. (the number of days to the next local elections is in the sidebar to the left. You can count Harper & Thomas down & out)

Cllr Thomas started confidently, extolling the excellence of Barnet’s public services – the third most efficient in London’, with one of the ‘most low-cost back-office’ operations – yet stating the need to save money because of the cuts in central government funding. That might have been deemed to be factual, but the explanation of ‘transforming the council’, of a ‘new relationship with citizens’, that Barnet was moving to a commissioning model, and the way in which the savings would be made – privatisation – was purely political.

He explained that the next wave of outsourcing, the DRS, would be a joint venture (JV), that it was a ‘new concept to put these services out’, and would give the council more control – not, presumably, more control than full ownership, only more control than complete privatisation. The JV would also provide scope for the council to make money, as other councils would come to Barnet to do their planning work (have you seen the planning yearbook for 2013 and the low performance percentages of Barnet Council - 29% of planning permission for minor developments granted within 8 weeks whereas Bexley managed 72% and Brent 80% - why would another local authority give up a well performing department in favour of such poor performance?). Current staff were not trained to be commercial, so are being replaced with people who are. He admitted that work on the JV was and would remain on hold until after the judicial review of the NSCSO contract. (This on-off JV question is very confusing. Cornelius said councillors would decide, the council website says JV is just an option We are currently reviewing, in discussion with sponsoring members, the option of a joint venture. Thomas says it will be a JV. What the heck is going on, is there a power struggle, anyone thought to ask residents?).

He repeated the well-rehearsed lines: how much adult and children’s services cost, how much the Capita contract would save, what a small proportion of the budget the NSCSO is, that risks were mitigated by a parent-company guarantee, that the contracts would be monitored and could be bench marked if necessary, that without these measures council tax would have to be increased by 38 per cent – again failing to say ‘over ten years’. He said bringing recycling back in-house was proof that the Cabinet was not ideologically driven. But, contradicting himself again, he said that the One Barnet Programme was a [central] government pilot. He and Cllr Andrew Harper, in attendance as the HGS ward councillor, seemed surprised to be met with nothing but scepticism and opposition. (do councillors live in a bubble?)

The newly informed residents questioned the validity of the monitoring system, the risks of and lack of competition inherent in a 10-year contract, the probability of failure, the way the ‘customer services’ would work, whether procurement was being outsourced (the councillor had neglected to itemise the services, just referring to them as ‘back office’), whether councillors should have lower allowances or were needed at all. These residents told the councillors that monitoring and KPIs allowed companies to ‘game the system’ – that is, assess their own performance as compliant even when it was not – and that no private supplier of public services had delivered the savings it promised. They countered Cllr Thomas’s claim that NSL was delivering on budget, and told him about the 60% parking-ticket-appeal success rate, which he and Cllr Harper said they would have to look into. The residents were not impressed by Cllr Thomas’s explanation that private companies made savings over what he had said were the very efficient Barnet services by paying their staff less and giving them fewer benefits but offering them better career opportunities. They exposed the inconsistency in his saying Capita had up-to-date software and systems for running Barnet affairs but somehow need to invest £13 million of Barnet money in IT, which Capita would then own. They did not accept that financial penalties for failures and the possibilities of renegotiating aspects of the contract after four years were sufficient safeguards, pointing out that the council would be tied up in legal arguments by Capita to counter any penalties.  They suggested it would have been better just to hire top managers from the private sector to run council services more efficiently than to contract out. Cllr Thomas’s explanations of why the council couldn’t run the public services as well as a private company sounded like he just thought the job was too difficult for him. (Mr Mustard has come to the conclusion that councillors can't be bothered to sort out management who are not up to the job and councillors think that contracting everything out will be easy and their problems will disappear. Different problems will take their place. All we see instead is that staff problems are harder to resolve because they are someone else's staff and so you can't discipline them. A case in point is the NSL traffic warden who told Helen Michael of Cafe Buzz that she was only fit to clean the toilets and that complaint should have been dealt with the minute he came off shift, in fact he should have been called back to base the moment the complaint was made. He is still patrolling North Finchley as Mr Mustard has seen him. At the least he should be exiled to Edgware (Mr Mustard has nothing against Edgware - he just wants the warden a long way away from Cafe Buzz)).

Cllr Harper said monitoring would also result from feedback by individual residents. He was asked how much impact those individual’s voices would have when the Cabinet ignored a petition signed by more than 8000 residents. Cllr Thomas trotted out his ‘that’s only 2 per cent’ of residents line, and the dismissive ‘people will sign opposing petitions’; does a politician really think he’s scoring points by suggesting that his electorate are so stupid? We countered that the 8,000 was not a result of canvassing the entire borough, that BAPS was trying to get only 7,000 signatures. We could have added, 8000 is a lot more than the 11 Cabinet members solely responsible for the OBP.

Cllr Harper’s other contribution was to say that the Tories had frozen council tax, a comment that was almost jeered. (Mr Mustard does not want his council tax frozen at the expense of people who have needs that society should meet)

In reply to a question about Capita’s appearance on the Barnet website, Cllr Thomas said that Capita had started working with the council after the decision in December to award the contract. There was no opportunity to ask whether the parties should have waited until signing the contract before this work began. (We have seen Capita appear on the website already).

The foregoing is, of course, a summary, not a verbatim account (except where quotation marks are used), so comments are not attributed to individuals. There were no voices supporting Cllr Thomas’s presentation. While there’s no knowing what the silent minority thought,  on their way out, the residents were offered the Barnet Spring March leaflet, and I think only one declined it.

It is interesting that the Cllrs Thomas and Harper did not initiate this event, and that elsewhere in the borough Tory councillors have not appeared before their constituents to explain the OBP. After this showing, they will probably be even more reluctant to do so.