Injustice (where? in parking? surely not?)

Parking tickets are utter madness at any time and cause great affront. One is entitled to be outraged when you follow the rules and then have a parking ticket issued to you which is upheld by the independent adjudicator, not through some fault of the motorist but of Barnet Council.

Here is what the adjudicator said following an appeal from Monday:

The appellant says that she made every effort to comply with the conditions of use of the designated parking bay. She says that she went to nearby shop to buy a parking voucher. She produces a voucher which had been scratched out to show the date, and the time of arrival as 4 minutes after issue of the Penalty Charge Notice.
The evidence of the officer is conclusive of the fact that the bay in which the vehicle was parked was a 'pay by phone' only bay. There is no provision for the obtaining and display of a voucher. The sign is clear and unambiguous.
The appeal is refused. 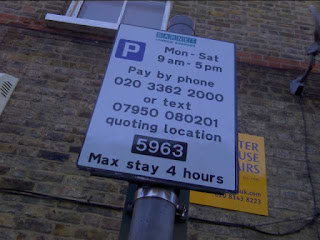 This sign does not mention that you can pay by voucher or that you can pay at paypoint. That information may be on the tall thin secondary information sign that is on the other side of the pole but the independent adjudicator in this case did not know that and the pay-by-phone signs on the shared use bays in Mr Mustard Road do not disclose the existence of vouchers.

The pay-by-phone bays will now have to be renamed "Pay-by-phone or voucher or paypoint or credit or debit card at meter bays" - doesn't it just trip off the tongue?

Questions are tumbling over themselves to be asked.

Why did the formal appeal not pick up that Parking Vouchers are a perfectly proper way of paying? (Probably, and as Mr Mustard doesn't act for this motorist he can only surmise, because the appeal was on the basis of having purchased a voucher and the rejection will have been that too long was taken to do so)

Would the council have decided to cancel the parking ticket when they saw the notes from PATAS because they knew that the decision was based on a lack of knowledge of vouchers in Barnet? (Extremely unlikely)

Does the Traffic Management Order (TMO) mention these new Parking Vouchers that traders are encouraged to sell? (Possibly not and this is a question that Mr Mustard has asked, in general for all pay bays, of one of his council parking contacts. They are probably having a bad day now.)

If not mentioned in the TMO will all the TMO have to be updated? (Yes and it will take ages).

Did NSL (on behalf of the council) send PATAS as part of the evidence pack a complete copy of the TMO or just a short extract which is what is usually done as they can run to dozens of pages? (Probably an extract and so if anything about Parking Vouchers is in it the adjudicator will not have seen it).

Did NSL send a copy to PATAS of the tall thin sign which is shown above? (Even if they had, which is doubtful, it doesn't mention Parking Vouchers).

Does every "pay-by-phone" time plate in the borough need changing? (oh dear, another headache for parking client side -  Mr Mustard isn't expecting a Christmas card).

Why should traders sell Parking Vouchers that are useless? ( They cause more trouble than they are worth. It would be much better to have more free bays in town centres to encourage trade and to put meters in car parks that take cash, credit/debit cards, tokens and smart cards.)

Once Mr Mustard has the answers from parking client side, so will you.

As an aside there is a box on the voucher which includes the instruction in tiny type to complete your registration number. Do that or get a parking ticket. Mr Mustard has suggested this box be removed at the next reprint as a 1 hour voucher is hardly likely to be used by two vehicles.

A member of the parking client side has been in touch. This is speedy work which is to be commended. The response is:


I do not agree with the excerpt “There is no provision for the obtaining and display of a voucher”. The Traffic Management Order for the bay in question (TMO 2008 No 17 – Schedule 20 – Item 555) and the amending Traffic Management Order (2011 No. 78) defines the methods of payments accepted here in Barnet, including the displaying of Parking Vouchers (I have only attached 2011 No.78 as 2008 No 17 is over 60 MB).

I can confirm that authorisation has been given by the Department for Transport for our signage. I am therefore satisfied that said signage is compliant and within the law.

So the good news is that the injustice will be corrected and it was a one-off at Patas and hopefully it won't happen again.

The question to which we will never know the answe ris what would have happened if Mr Mustard had not read the PATAS decision.