Beyond a joke - double helping

Friday jokes are something of a tradition for the bloggers. It sounds like Richard Cornelius might be the laughing stock today if rumours are to be believed that he has not taken any action against Brian Coleman other than tell him of his displeasure. That isn't showing leadership Richard. In fact Mr Mustard can report that he has obtained a fly-on-the-wall photograph of Richard Cornelius discussing sanctions with Brian for, amongst other episodes, saying he won't apologise for besmirching the good name of Ron Cohen.

Apart from that London Councils are beyond a joke. Here was a car on Saturday morning in Chipping Barnet (Toyotas spell trouble!)

and here is the badge that was in the window.

Note the absence of an address on the little pad, just the house number is sufficient, which is meant to tell the traffic warden where the medical emergency is which the medical bod has been called out to. Now Mr Mustard knows everybody in his road and he has not heard of any medical emergency having occurred on Saturday morning and this would be the third emergency in a road of 40 houses in 2012 alone. Mr Mustard wonders if the emergency was actually here just across the road? (run out of tea bags or milk). 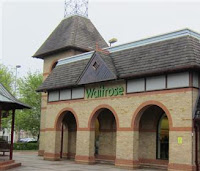 The next time Mr Mustard sees a London Councils supposed medical emergency car in the street he is going to hand around with his camera, or video camera & tripod and photograph or film the driver if they are carrying shopping bags. You have been warned! The Spires has a reasonably priced car park; use it if you are on personal business.