Tax is complicated and thus far people have been allowed to get away with saying that the tax take for the exchequer is not much different between employing someone directly on the payroll under PAYE and employing them through a personal service company. Mr Mustard is going to show how different the tax take can be.

To save your time Mr Mustard would just like to repeat two parts of the evidence:

By Carolyn Downs, Chief Executive of the Local Government Association

and by Ms Zarin Patel, Chief Financial Officer of the BBC


In my judgment, the IR35 anti-avoidance legislation is very strongly crafted, so that if you work through a service company, on an employment-type contract or quasi-employed, you will pay the same amount of tax


Mr Mustard has found a perfect (imperfect?) example in the shape of Mr Andrew Barrow who used to work at Barnet Council. What do we know about Mr Barrow? He worked at Barnet Council from October 2010 to June 11 as a "Finance Interim/Consultant". On 9 September 2009 he subscribed for the 1 share in the newly incorporated Cobalt PFM Ltd.

This incorporation coincides with the start of a 4 month stint working as Head of Finance & Commercial for Serco (Mr Mustard wonders if they suggested he form a personal service company?) from Sept to Dec 09.

It looks to Mr Mustard, from these invoice extracts obtained under Freedom of Information, that Mr Barrow was employed through Penna Plc (notwithstanding the redaction, as the dates agree): 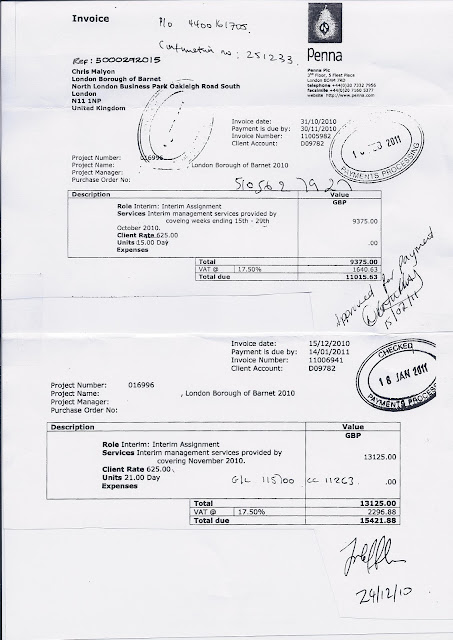 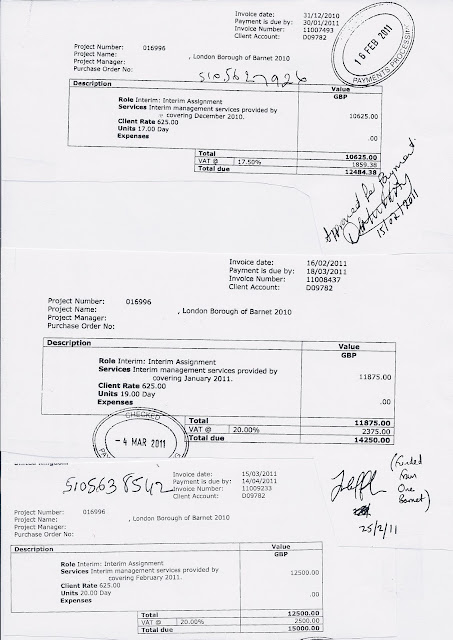 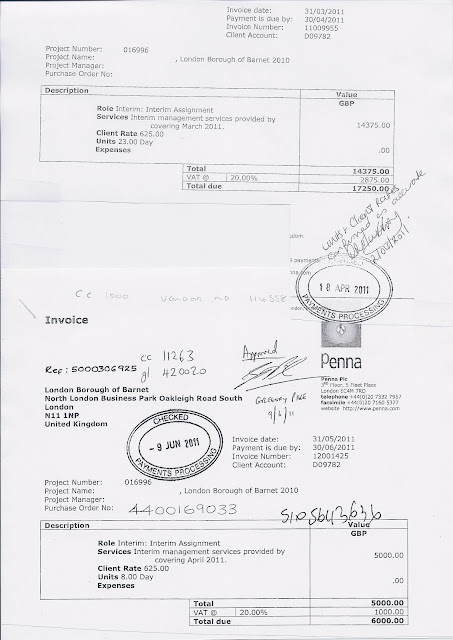 Now we need to ask ourselves if Penna Plc were the employer of Mr Barrow, did he pay PAYE there? Well if he did, there would be nothing going through Cobalt PFM Ltd and there is.

What is interesting is that Cobalt PFM Ltd only had one issued £1 share when it was incorporated and that changed on 1 November 10 when a second £1 share was issued to Tracy Barrow. Mr Mustard doesn't think she has worked at Barnet Council and so anything paid to her out of Cobalt as a dividend, because it hasn't gone through the council payroll, leads to a tax advantage. What we don't know is whether Cobalt PFM are being treated within the IR35 legislation or not, and tax in this area is a bit complicated. 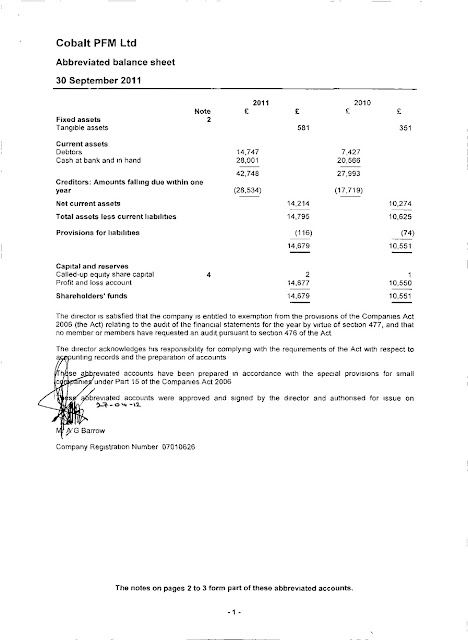 and here is the note about the issue of the extra share. There must have been a good reason to do that paperwork (tax reduction?) 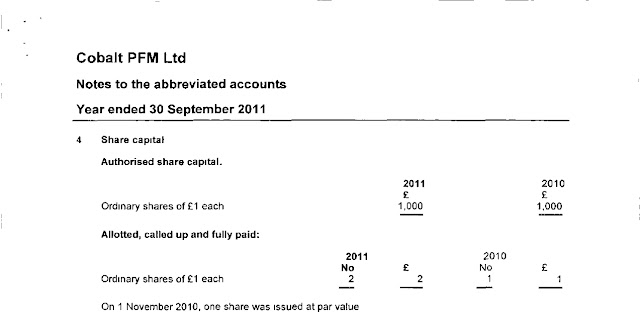 Now, we can't see any more financial information than that about Cobalt but what we can do is a comparison of tax paid under PAYE between all the income being earned by one person under PAYE and the same income spread across 2 people (they don't have to be husband and wife, they just happen to have equal shareholdings in a company) for a fictitious company/people. To make this simpler, National Insurance and Dividends have been been ignored although using dividends is likely to be even more advantageous. For this example, income has been assumed to be 200 working days in a year at £600 = £120,000

Using a personal service company may not be designed to save tax but that could just be one of the pleasant side effects. Mr Mustard has to stop there and look to see how many of the other town hall tax dodging service companies happen to have a second shareholder.