Mr Reasonable kindly let me know that the first set of unaudited Accounts for the year to 31 March 2011 were ready to look at. He has already given them a good blogging here: £1 million to leave Barnet Council
Mr Mustard has taken a look at the salary levels that have to be put in the notes.
Although inflation is generally low in the UK, in the parallel universe that is Barnet Council, it seems that inflation is rampant. The notes to the Accounts have to include all staff paid over £50k in £5k bands.
I have put the tables of 2 years together.
Each set of Accounts shows you this year and last year.
So you have 2011 & 2010 in the latest Accounts and
2010 and 2009 in the Accounts of last year
and of course the figures for the year to 31 March 2010 will be the same in both sets, will it not ? Let's see:-
Now what do you notice ?
- The number of higher paid employees is rocketing from 444 to 487/492 to 578 in 3 years.
- When the Accounts were signed off for 2010 there were 487 higher paid employees and suddenly now there were 492 of them for the same financial year. Where were those 5 employees. Perhaps there weren't any Contracts of Employment for them and so no-one knew they existed ? Or can't the bean-counters count ?
This table doesn't include Contractors as they are not employees so there are actually more high paid employees than the table shows. At least 5 that Mr Mustard knows of.
Two examples are :
Mr Andrew Travers, the £1,000 a day consultant Deputy Chief Executive and
Jason Wheatley - Interim Resourcing, Performance & Talent Manager ( the Audit Committee yesterday evening was certainly a right performance - they must have had some coaching although there was a distinct lack of talent in evidence amongst Officers although plenty from Councillors who were rocking the OneBarnet boat ) who was paid £104,500 in the year ended 31 March 2011. Actually not quite true, he wasn't paid it but his company Advance HR Consulting Ltd was.
So who signed off these incorrect Accounts in 2010. Oh no, it was Mr Travers. ( Sorry Lord Palmer, your name is on them as well but Mr Mustard takes the view that day to day preparation of these was not within your control, you sign more as a honorary duty because you are quite entitled to rely on the work of someone paid £1,000 a day. ) Hey, Mr Mustard has an idea. You are a proper Chartered Accountant and could be the Chief Finance Officer instead of being a Councillor. How about it Lord Palmer ? The money is good although we do need a bit of a reduction against the current excessive fees. 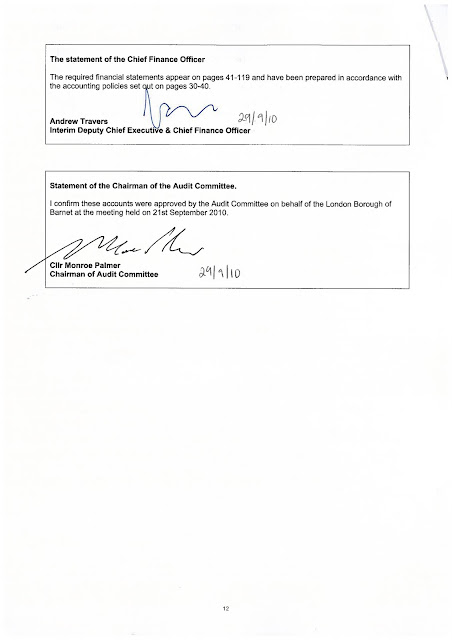