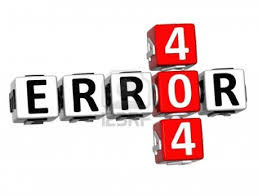 This isn't a story of the usual computer says no error but one of traffic adjudicators who have said no. Mr Mustard is sure that their Appeals handling software is set up to identify multiple Appeals for the same vehicle or the same Appellant (motorist).

In a less structured way Mr Mustard spots patterns, he had seen the name of the  particular car hire company on previous occasions and he decided to click on one of the entries whilst persuing the daily decisions (usually only looking at ones for Barnet), the decisions fairly made his hair curl.

This was the first decision that Mr Mustard clicked on. It sets out the requirements for the transfer of liability to the hirer. 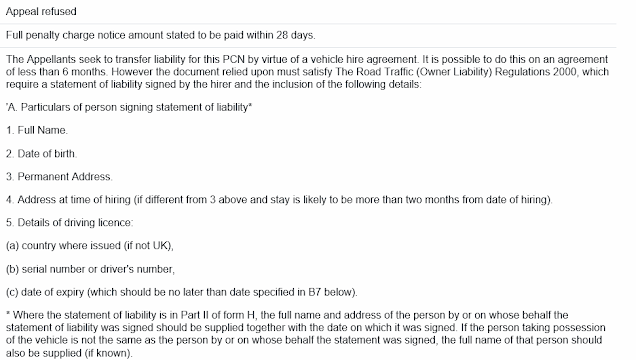 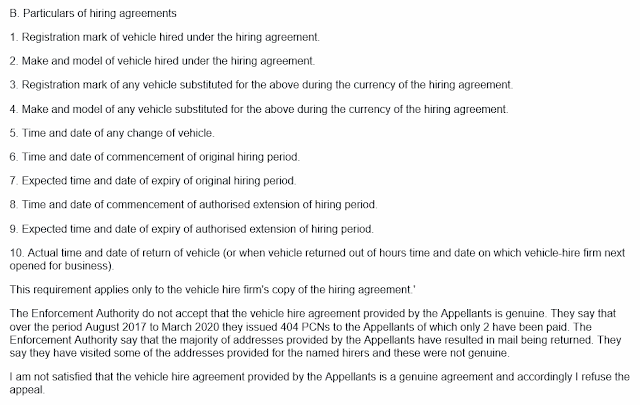 A wider scheme to avoid liability.

A clear problem with enforcement. Not satisfied the agreement is genuine.

Mr Mustard has sat and argued (politely) with Adjudicators for the last seven years. He has been in front of thirty or forty of them. They are all experienced lawyers, some have been criminal barristers, and they are razor sharp and can spot a lie from 100 paces. Just don't expect to tell them something which isn't true and get away with it and there may be consequences.
One adjudicator once told Mr Mustard a story. He said that people accused of murder will admit to it but give them a parking ticket and they lie their socks off. Don't be that person (nor the murderer please).
The stupid thing here is that if the hire company creates compliant hire agreements it can pass on liability to the person or company who hires the vehicle (except for bus lanes). Surely that is easier than what they are currently doing?
Yours frugally
Mr Mustard
Posted by Mr Mustard at 11:54 am