Mr Mustard is sorry to repeat himself but he is fairly sure he has written about this subject before. He also thinks he has an email from the council in which they promise to check rental agreements properly from now on (last year it was or earlier). It seems that both parties have forgotten what they did in the past. Clearly though, a gentle reminder is required at Barnet Council / NSL Ltd.

Here are the rules: 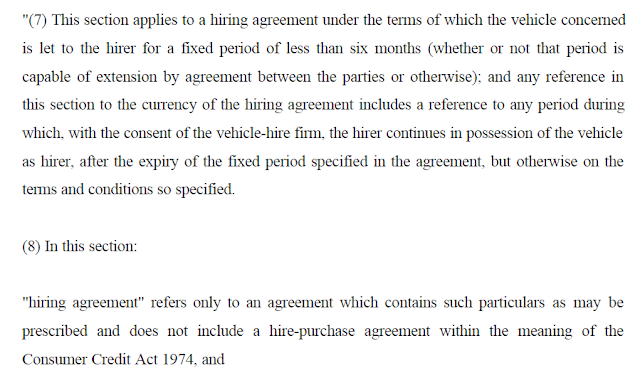 Liability for a parking PCN (not a bus lane one) can be transferred to the person who hires a vehicle, or receives it free as a courtesy car, provided that the hire period does not last for 6 months or longer.

What must the hire agreement contain in the way of details, besides an undertaking to be liable for any PCN issued during the currency of the agreement? The following: 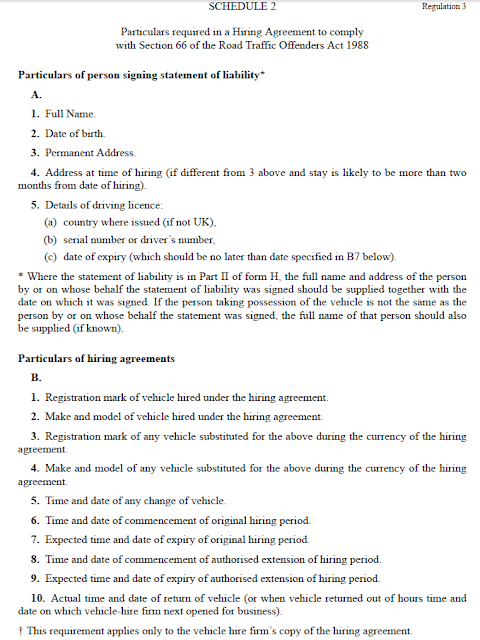 Mr Mustard has just been asked to assist a lady by representing her at the tribunal the week after next. Mr Mustard studied the papers and found that liability had been passed on twice to reach her. Here is the first transfer of liability which the council (perhaps acting by their agent NSL) accepted as OK 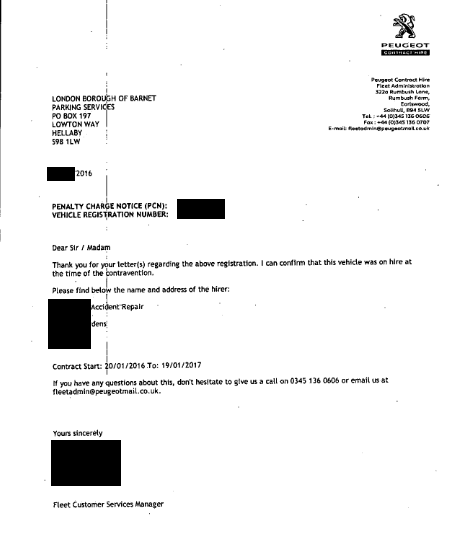 Now pretend you are the council and/or NSL. Why would you transfer liability? You wouldn't, would you, as the hire is for a year which if of course a period greater than 6 months. Peugeot cannot, therefore avoid liability for the PCN. Tough, but the law.

Having passed on liability the council then sent a Notice to Owner to the accident repair firm in question. They too didn't want to be liable and produced the following agreement: 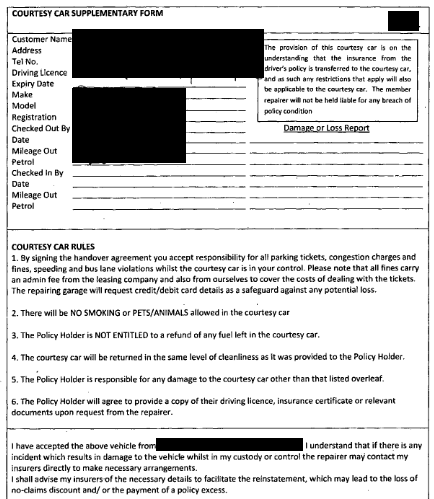 So readers, what is wrong this time? The expiry date of the driving licence is missing as is the country of issue. The out time was not stated. The proposed return date and time were not stated. The date of birth was not stated. This rental agreement will fail to be accepted at tribunal as being one on which liability can be transferred (Mr Mustard won one such case when the only thing missing was the make of the vehicle). This one is simply awful and cannot be considered to be substantially compliant. Why did Barnet Council / NSL Ltd accept the accident repair company's representations without question? Mr Mustard thinks they accept anything from a company as they prefer liability to be with the little man (or lady in this case) who is more likely to pay up. This is conjecture on Mr Mustard's part, it could simply be that whoever is deciding upon these transfers is an incompetent and/or ignorant of the law.

Whatever the reason Mr Mustard is about to point out to Barnet Council how they are breaking the law whilst trying to extract a penalty for a contravention (paying for the wrong vehicle given that the driver was in a courtesy car and forgot to register the short term replacement on PayByPhone) which makes this the second blog in a row to highlight the hypocrisy of the council when it comes to following rules.

If you get a Notice to Owner about a PCN when you were driving a hire or courtesy car, do check the agreement against the above requirements. In this case the first agreement only became available once the evidence pack was produced for the tribunal case.

Never assume the council have got it right when it comes to a PCN, they err frequently.