Cllr Perry - does she care about libraries? 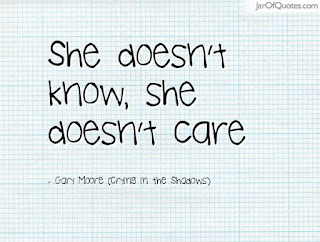 Back on 11 October Mr Mustard was fretting about libraries and what the council were planning to do with them in Barnet so he wrote, in his real name, to one of his local councillors. Mr Mustard has noticed that in the past whenever he wrote to either of the female councillors for his ward, it was the man, Goldenarse as he is known (copyright Mrs Angry) who always replied. This time no-one replied.
Dear Councillor Perry

I am a local resident and user of Chipping Barnet library.

I have studied the recent proposals. I don't intend to tell you what a bad idea it is to reduce library provision as that point has been made many times elsewhere but as you will gather, since I am writing to you, I am not in favour of these budget cuts. A 1% increase in council tax would eliminate the need. In the last 5 years my gas, electric, water rates, phone bill, car running costs, food etc have all increased in cost and your freezing (and a cynical 1% cut) of the council tax has therefore made a negligible contribution to my personal budgeting. I doubt you would have had more than a handful of complaints if you had increased council tax by 1% a year but we are where we are, with death by a thousand cuts.

I am though concerned about unstaffed libraries.

·   These mean the toilets are closed (not a problem for me personally as I live nearby) but for those further away a potential problem of being caught short.

·      No access to digital library resources and yet by their nature they could be used by the vast majority of library customers without assistance. I manage to navigate the internet on my own.

·   Extra income from hall hire but only during staffed hours. That doesn't look realistic. It would be a good idea to test the theory that an extra £20k can be generated. Will the estimate be better than the one for Your Choice Barnet? Who haven't, as far as I know, met their targets for generating income from other boroughs.

·      Hiring out car parking spaces. My experience is that of a evening Strafford Rd is often full. Why am I looking there? Because Carnarvon Rd is also full. I usually end up in Wentworth Rd. I think that the council should do a survey of a late evening to see if those spaces would be better used as residential permit spaces. Please bear in mind that many residents of Alston Rd have to move up into Strafford, Carnarvon & Salisbury roads as there is limited provision in Alston Rd.

I have looked at the Edgware pilot. It has cost a packet so far (£131,503) and it has seen 80 visits per week so it has been a virtually empty building. I looked back at earlier proposal for libraries and see that Edgware Library had 237,950 visits in 2009/10 which is 76 visits per hour. Your legacy is that you have already decimated the library service.

Don't you think that a small increase in council tax would be worth it to restore a much loved public service? I think you may have forgotten why councils exist, to serve.

Yours sincerely
Mr Mustard concludes that his councillor does not care.

It is also discourteous of a councillor not to respond to an email from a constituent.

There are some consultations now going on which have not been widely advertised so do go along and have your say and don't let yourself be pushed to say anything different to what you really think. 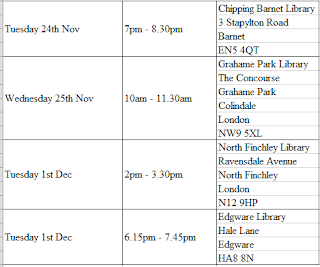