No contravention & no car now either

OK here we go with a most improbable story.

18 June - evening - the car breaks down. It is left at the side of the road, on a single yellow, with a note under the windscreen wiper.
19 June - the council concerned issue a PCN and fairly instantly remove the car to the pound.
25 June - Mr Mustard's client cannot afford to pay to release his car (£65 for the PCN, £200 for the removal & £40 a night for storage) but goes to the pound where they give him the PCN but not a letter explaining his rights. The representation grounds on the PCN are not the ones for the removal of a vehicle. Also, the PCN says that if you pay you lose your rights to contest the PCN. The perfect storm.
1 July - the council write saying that unless the PCN and the fees are paid there is no right to make representations. They sandwich together several parts of the relevant regulations, which are here in their original format: 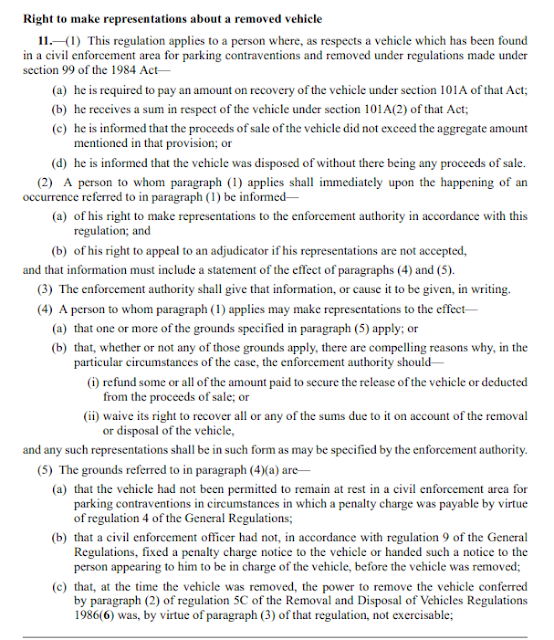 There is much toing and froing of non-statutory communication but then, on

22 October - a Notice to Owner is issued.

27 November - the council scrap the car. Yes, really they do.

24 December - the council reject the representations. One of their reasons is that the Owner has not produced proof of the vehicle being repaired after it was broken down. Funny that as it was in the council pound all the time!

5 March 15 - PATAS allow an Appeal as the council do not submit any evidence.

So; Mr Mustard's question is simple.

It does seem rather odd that this client has been found, 9 months after he was deprived of his car, to not have committed a contravention but his car has been scrapped and the council concerned are telling him to get on his bike, they were within their rights to scrap his car (even whilst they were considering his representations!).

Does anyone have anything that will help Mr Mustard's client?

The council concerned haven't even heard the start of this, never mind the last of it.

Update 22 August: Just after midnight a PATAS case thudded into Mr Mustard's inbox in which a different council takes a right legal thumping for having failed to inform a motorist of his right to make representations immediately upon the removal of the vehicle.
Posted by Mr Mustard at 10:27 pm