Injecting with botox whilst Barnet Council apply the leeches

Mr Mustard wants our high streets to remain otherwise one day we will all be born, come home from hospital if they still exist, and not leave home again until we go out in a box and that is not the kind of society that appeals to Mr Mustard.

Mr Mustard was invited to attend the launch event of the Future of North Finchley at the Arts Depot and he duly did having also blogged the poster for others to see.

There was an introduction by David Longstaff, a talk by Sally Williams of Retail Revival, another by Liza Fior of MUF Architects (MUF stands for Modern Urban Fabric) another by Tracey Cooper of ArtsDepot, another by a local resident Brenda Goldberg (not Barbara as she was styled on the invite, oh dear a lack of attention to detail there) and then finally Helen Michael the queen of parking got up to speak.

Mr Mustard has a couple of bones to pick. Sally denied, with respect to Mr Mustard's interjection about money on shopfronts in High Barnet perhaps not being the best example of what to spend on, that money had been spent on Cafe Pacino which has since closed down. Bloggers remember lots of detail. Here is what the Barnet Residents Association had to say in their newsletter

In the lower half of the High St two shops, Chudys and Cover - along with Café Pacino in Church Passage - were similarly treated along with the provision of new awnings. The next task of course, and decidedly more difficult, is getting other shops to create more tasteful frontages that will contribute to the overall kerb appeal of the town.

Now Mr Mustard does think Sally is on our side but he will have to put what she says through a verification filter from now on. A bad start but every dog gets two bites.

Lisa Fior of MUF architecture said "we have used the bloggers", No Liza. We are independent, there were two of us there, + Dan of the Barnet Bugle (a newspaper that looks like a blog) and we did not confer before advertising the event or afterwards about what we would write, if anything. We decide individually what, when, why and how we write. Barnet Council should not be proud of the number of bloggers that write about Barnet (and there are more than the famous five, see the side bar to the left) they should be sitting up and taking notice and trying to be so boringly efficient, display so much common sense and good judgment and spend money so wisely that there is absolutely nothing to write about (a vision that Mr Mustard hopes will one day come to pass).

Helen got up to speak and of course most things had been said by then. She also wasn't given much notice that she had to speak and so it was off the cuff. Helen loves North Finchley as she lives and works there but gagging her by telling her not to talk about parking was pretty stupid.

There are lots of problems facing the High Street although exactly what they all are and the size of each problem is a subject that one could argue about in the Bohemia for hours on end. One problem is simple to solve. We know that traders across the borough saw falls in trade of 30% to 40% as soon as coin operated parking meters were taken away and for most this will have turned their profits into losses. Put back coin operated meters (yes they could also take credit cards) and trade will magically improve to somewhere near where it was 2 years ago (the charges also need to be lower and there should be more free parking bays - calm down cyclists, you will get thought of)

So as soon as the speechifying was over Paul Shea of Tally Ho Discount (and now also selling lots of low priced fruit and vegetables - follow him on twitter @thfruitandveg ) was away like a pack of hounds after a fox and asked about parking. Everyone wanted to talk about parking except Barnet Council and its consultants. The council and its consultants want people to give up their time to make North Finchley a better place which is all right up to a point but why do we pay council tax or business rates,  is it just to fund the £130,000 salary of the Director of Place who wasn't in attendance, and most people are pretty busy, Helen, for example, works at least 12 hours a day 7 days a week and many other traders are having to work long hours to try and improve their turnover or to cover for staff they could no longer afford to employ once the council kicked them in the shins. So really the council should do all of the work because it is why they are there; people should simply be asked to contribute ideas.

There were only about 100 people at the launch. There should have been a lot more. That was fewer than half of the traders there and hardly any residents. Publicity of these events needs a much greater effort in future. Mr Mustard has had a business in Barnet, with a registered office having a Barnet postcode for a lot of the time, for 25 years and he cannot recall more than one approach from the council on a business matter (and that was whether he was interested in bidding to collect poll tax from which he ran a mile) and so he wonders how many businesses Barnet Council just don't know about. In Mr Mustard's road of 30+ properties there are 14 businesses run from home and he doubts that Barnet Council know about more than one of them. An architect who lives and works in North Finchley was spitting nails because he only heard about the event as he is a member of the folk club.

What the council does do is take away easy payment methods and give us hard ones that don't cater for all of the populace (unlike cash which does) and squeeze the motorist for over £12 million giving them a net annual profit from parking (income and parking tickets) after costs of £5 million of £7.5 million. The council should simply aim to break even from parking and no more. The council are hindering the high streets by taxing them out of existence.

Mr Mustard noted down one or two of Helen's ideas. She wanted coin operated parking meters but didn't say so as she was asked not to, she wanted to improve footfall, she wanted to get University business students into one of the empty shops so all the latest idea would pour forth, she wants a website listing all of North Finchley's businesses, she wants the Finchley carnival back, she wants better Xmas lights, she wants to improve the market and possibly relocate it and generally she wanted the town centre to be accessible and attractive partly by making it much greener.

There was some anger that the £1.1m (not Boris's money but our money) seemed to have been carved up into chunks already without the traders and locals having had their input into what they would like to see which bespeaks of the usual council arrogance and it is clear that the 2 council officers who are charged with getting the Town Team that is to be formed are going to find it challenging (as problems are euphemistically called these days) but they have both shown themselves prepared to listen even though they don't have the authority to sort out the debacle which is parking but the face lift that they are charged with managing will be to no avail until the council remove the blood sucking leeches from the legs of the patient.

Dean Cohen was another councillor notable for not being there and David Longstaff who should have stepped in when the meeting was going all wrong (you can read Roger's report here) sat on his hands. Mr Mustard has been in touch with Sally, Liza and David and given them his tuppenceworth and he will be of positive help once parking meters are installed.

An ugly rumour has reached Mr Mustard that there are plans afoot to spend £30,000 on new rubbish bins. What is the point of asking for ideas if someone in authority has already taken a decision. £30k on new bins would be a waste. Does anyone go to a high street elsewhere for shopping because they have new rubbish bins? No. £30k would buy 6 or 7 coin operated parking meters. That Mr Mustard and probably every trader in North Finchley would vote for.

A tram, look here is one in High Barnet 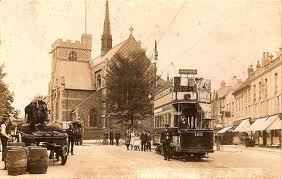 and another at Tally Ho

they would be so much better than buses. Mr Mustard would use them all the time and leave the blogger bus at home. Trams would reduce town centre pollution levels which are, he is told, very bad in North Finchley.

If we want people to cycle to work then facilities have to be provided. There is a cycle shop in North Finchley (Shorter Rochford) but it is on the edge of the shopping district in Woodhouse Rd. What is really needed is a cycle shop that does sales, repairs and all day secure bike storage, lockers and showers if we really are going to get an uptake in the use of cycles. No-one wants to sit next to a sweaty colleague so showers are a must and most shops and offices won't have any.

Mr Mustard loves French towns with their town square. He would create one in North Finchley. How? He would compulsorily purchase the building that stand between the Lodge Lane car park and the High Rd and make a square that joins to the High Rd. Shops could be built around the edge of the square with restaurants and offices above and flats above them. Car parking could be provided in a car park underneath the square. That is what they do in France and we should copy them. The council will say it is a lot of money but this is the sort of project that the council should be looking at to make the town a place to visit rather than trying to concrete over Cricklewood / Brent X. Look at this corner of a square in Bordeaux, Mr Mustard just wants to go there this minute, we need to develop the same feeling for all of the town centres of Barnet, not just North Finchley.

Mr Mustard does hope that coin operated parking meters and other good things do come out of this opportunity.

Mr Mustard
Posted by Mr Mustard at 7:29 am