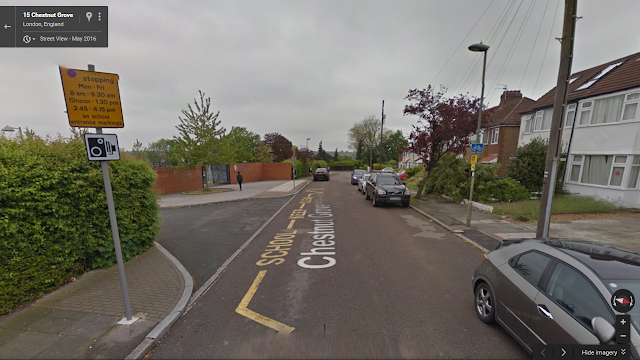 Of course you don't stop on school zig-zags, unless you have to.

This is a tale of an over zealous computer and an apparently under zealous contractor, NSL Ltd, as represented by an unknown employee (maybe).

You can see that what might happen here, especially at school drop off time is that parents may be perfectly properly dropping little Johnnie off after the zig-zags have ended and probably on both sides of the road. That narrows the carriageway way down to a single car width through which self evidently two cars cannot pass in opposite directions at the same time, ergo one of them has to give way and probably stop. If you are heading in the direction shown above then you have no choice but to stop on the zig-zags. No-one gets in or out of your car so surely you won't be sent a PCN, will you? Oh yes you will, by NSL Ltd on behalf of Barnet Council. Here is a photograph from one such event. 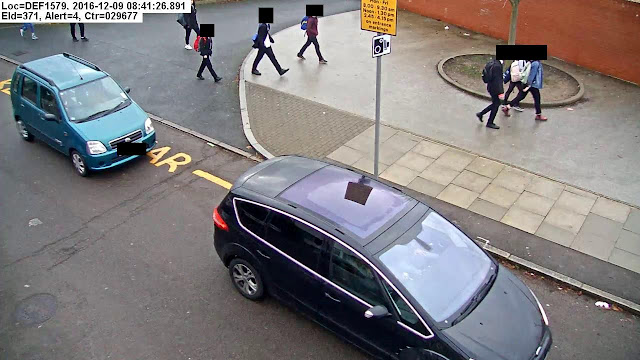 Mr Mustard's client was driving the teal coloured car (the Barnet Council corporate colour as it happens) and she could not proceed as the black car in front had stopped to let another car pass in the opposite direction. This was the first occasion on which she received a PCN, she got another one 5 days later when she was equally courteous to a driver coming the other way. The second PCN has been cancelled and the first should be very shortly as Mr Mustard has raised the problem with the parking manager.

The decision as to whether or not to issue PCN for cctv derived contraventions is undertaken, under contract (not yet seen) by NSL Ltd. Mr Mustard thinks that this breaches public policy interests as a private company, a profit motivated company, should not be undertaking public interest decisions. Mr Mustard has this argument in front of an adjudicator at the moment.

The council is required to have a belief that a contravention has occurred before deciding to issue a PCN. Mr Mustard has watched the cctv. It shows the reflection of a car in the side of the black car going through in the other direction and then later on when his client moves up another car also going through in the other direction. So it is clear that a contravention did not occur.

Therefore, either the computer decided to issue a PCN which means that the council itself did not hold a belief or the operator who watched the video isn't up to the job. Neither is a satisfactory situation.

Mr Mustard dealt with the same problem in Richmond Rd last year.  Clealry lessons learned were not applied to other locations.

Mr Mustard has asked for compensation for his client who has been wronged and who has been put to time & trouble and the worry of having to find £260 just after Xmas when budgets are tight. Luckily she is a client of Cafe Buzz who told her about Mr Mustard. She won't now be parting with a bean.

If this happened to you, do not pay, make representations & take the case to the tribunal if rejected.

Mr Mustard
Posted by Mr Mustard at 9:25 am