Newham Council out of line

On 28 and 30 March the representations against 6 PCN for committing the same moving traffic contravention were delivered to Newham Council. The first set of representations were against 4 PCN and the second for 2 more which came along just after.

They read as follows:

This vehicle (LN08***) has been cloned. It is used during the working week in Rugby for commuting. The attached photos may help highlight differences in the actual car to your captured images.

The challenge is that the car has been cloned so the contravention did not occur.

Rather than issuing any more PCN it would be helpful if you were to report the car to the police if any CEO sights the car on the street.

Would anyone who was not genuine invite the involvement of the police? No.

This was one of the photos (without the redacted plate obviously) 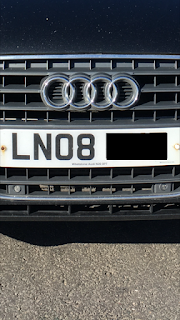 against which the council could compare their camera footage. The number plate screws and the name of the dealer were different to the cloned car.

Mr Mustard's client has now just received, a few days within the rather too generous 3 months which councils are allowed (it is only 56 days for parking) to respond to representations about moving traffic contraventions, Notices of Rejection for 4 of them, but not the same 4 as were challenged together, only 2 of those and the 2 later ones.

This is part of what their Notices of Rejection contain:

Do you get the feeling that Newham have not studied the problem very carefully given that photographs were submitted, photographs that other enforcement authorities found to be adequate. Unfortunately for Newham, Barking & Dagenham Council cancelled, Redbridge Council cancelled, the IBIS hotel cancelled & the London ambulance service accepted that it was not Mr Mustard's client who hit one of their ambulances and sodded off. They all had similar evidence to assess.

Newham Council have issued 4 forms on which an Appeal can be made to London Tribunals. Each one of those costs Newham Council £30 so they are going to be £120 down at the end, the result of their failure to properly consider the representations. Mr Mustard wonders how often someone who lives in Rugby decides to pretend their car has been cloned and then carries out multiple driving contraventions in London? Probably never.

Mr Mustard has, during his preparations for the Appeals, realised that the wheels of the cloned car are much more fancy than the real car.

Mr Mustard would send these extra photographs off to Newham and give them a second chance to cancel but as they don't provide an email address, nor a phone number to have a friendly chat on, he can't easily do that so they will just have to receive the photos with the official Appeals as he doesn't want to miss the 28 day deadline for getting the Appeals into the system.

Separately Mr Mustard has written to London Councils suggesting that they could play a role in collating information about cloned cars so that once one authority is satisfied that a vehicle has been cloned then other authorities would probably want to follow their lead and everyone would save time & trouble. Let's see what they come back with.

Cloning is far too common and creates huge amounts of paperwork, and the necessity to prove your innocence otherwise you become guilty by default, as well as the worry that you will be financially liable for something you did not do which really is an injustice.

Mr Mustard
Posted by Mr Mustard at 8:33 am